Go to the Prior Tip  To Forgive Design: Understanding Failure by Henry Petroski
Go to the Next Tip  Brain Bugs by Dean Buonomano
Return to MaxValue Home Page

The 1890 $1000 Treasury note is popularly called the "Grand Watermelon note" because of the design of the zeros—they look much like watermelons. It is about 50% larger than current bills and is still legal tender. 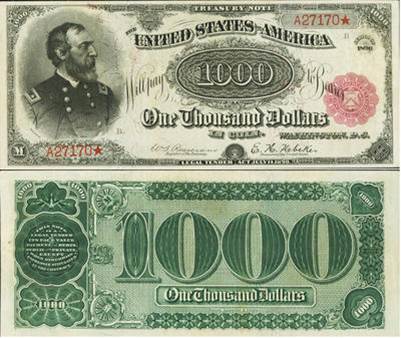 The last big bills were printed on Dec. 27, 1945. The government asked holders to exchange the large-denomination bills for smaller denominations. Some people held on, as the large ones were increasingly valuable as collectables. Of 18,000 printed, only three remain in private colections.

Has holding the bill been a good investment?

Note: Calculating IRR correctly is much the same as correct PV, FV, inflation, and escalation calculations. One must use the correct discount/escalation rate and pay attention to the time periods.

Let's have some fun with "return" calculations. By return, most people use internal rate of return (IRR).

Let's look at the value of the note at four points in time. We can also adjust for inflation in latter years (I was only able to find inflation tables back to 1929 or so). Also, let's compare the Grand Watermelon to a basket of U.S. stocks (the S&P 500) and 10-year U.S. Bonds.

This table is used to calculate the nominal and real returns for the Grand Watermelon note across three and two time periods, respectively. In this context, nominal means actual prices or "money of the day." When we discuss real return, prices, etc., we are talking about calculations based on inflation-adjusted values (i.e., inflation removed, prices adjusted to dollar values at some reference date). 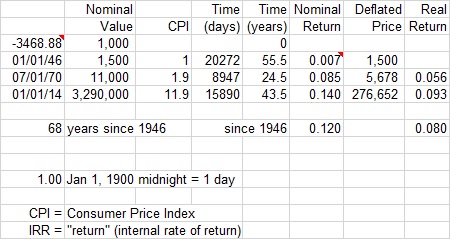 The four dates are:

I was unable to find inflation data back to 1890, as represented by the Consumer Price Index (CPI). So let's use only the CPI for years after 1946. Column C shows an "inflation deflator" with value adjusted so that January 1, 1946 represents 1. The nominal values (Col. B) divided by the CPI index provides the real prices (relative to 1946) in column G. Using similar IRR calculation we see the real returns (IRRreal)for the last two segments in Col. H. Holding this note has worked out well for the owners during 1946-2014.

Comparison with a Broad Stock Index and 10-Year U.S. Bonds

The S&P500 is an index of a basket of large U.S. companies. I added-in dividends so we would have a total return index for the S&P 500 stocks. 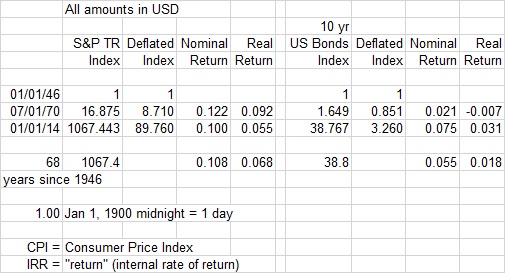 Was holding the Grand Watermelon note a good decision? We can't say, because we don't know the values and judgments of the owners at the time they made the acquisitions.

What we can say is that it appears the owners realized good outcomes. The real return for note ownership during the past 68 years has been .068/year. This beats the .055/year real return for the S&P 500. 10-year Treasury Bills, by contrast, yielded only a .018/year return.

If you want to check my numbers and see how these calculations work, the spreadsheet is available at:  https://www.maxvalue.com/IRR_GrandWatermelon.xlsx

Copyright © 2014-2018 by John R. Schuyler. All rights reserved. www.maxvalue.com Permission to copy with reproduction of this notice.