Go to the Prior Tip Smart Choices: A Practical Guide to Making Better Decisions
Go to the Next Tip Practical Risk Assessment for Project Management
Return to MaxValue Home Page

The Ostrich Factor: Our Population Myopia

I bought this book for its title. Population is likely the greatest issue facing the world, and I'm interested in learning more facts and proposed alternatives. While not as fact-laden as I had wanted (compared with Carl Sagan, for example), this little book is long on national and world decision-making philosophy, government and  individual decision process, and ecology ethics.

Garrett Hardin is eminently qualified to lead the discussion.  He is Professor Emeritus of Human Ecology (a field he founded) and is author of "The Tragedy of the  Commons," which has been reprinted in over 100 anthologies.   He is author of, Living Within Limits, and numerous other publications.

The book's icon (on the cover) is the ostrich, characterized by its mythical behavior of burying its head in the sand. Hardin identifies growth as an intoxicant. In the short-run, growth appears to have value.

Growth is associated with creating wealth and power. He asks, What is the objective? Maximizing population or maximizing quality of life? For me, the first is ridiculous, and the second is satisfying. Perhaps there are other candidates, but these appear the main choices.

Following the text on the last page is the icon at the right without explanation. (I think the image would be more satisfying if the graphic was the world instead of just the "lower-48" U.S.) 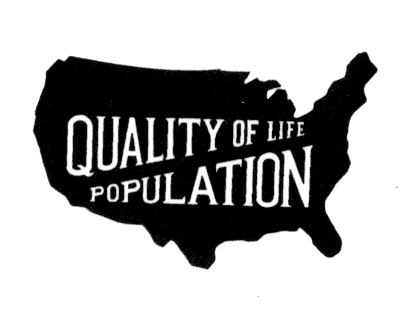 What is improved with greater populations? More Einsteins and Beethovens? Most everything we can think of is worsened:

Aha! A remedy that I expected from the book is the idea of some form of world government. Instead:

Hardin agrees that dynamics of government experimentation and competition are better.

The population problem is resistant to solution. There are two dominant beliefs (p. 185):

"An irresponsible system of supporting (encouraging) human beings will tend to maximize the number of human lives as it reduces the quality of life (p. 144)." However, "In a competitive world of limited resources, total freedom of individual action is intolerable (p. 140)."

Natural selection is discussed broadly. If population is not reined in by conscious choice, then natural (disease, starvation) or man-made processes (war, resource depletion) will do the job.

"It is painful for an adult to restructure the framework of his or her beliefs. For society as a whole, the time required for this process is often measured in generations." Perhaps the reason Hardin is not more prescriptive is that society must first acknowledge the population problem.  This would be a huge first next step.

This books is heavy reading. Fortunately, the chapters are short, well-organized and lucid.  Keep a dictionary nearby. I highly recommend this book about "the problem of problems."

Copyright © 1999-00 by John R. Schuyler. All rights reserved. Permission to copy with reproduction of this notice.